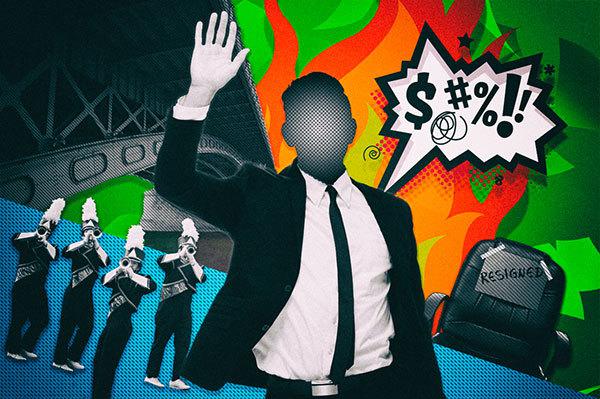 Everyone dreams at one point or another of making a loud and obnoxious exit, either because they’ve finally found a reason to quit their job or because they’ve been unceremoniously fired. It might be fun to daydream about the hilarious and disrespectful ways in which you could quit your job, but actually acting on those desires can be disastrous.

Kicking and Screaming. Throwing a tantrum like a two-year-old might be momentarily satisfying, but its definitely one of the worst ways to quit your job. When you throw a big fuss as you head out the door – no doubt escorted by security – you send a message that you can’t handle a professional atmosphere and your employer is better off rid of you. Taking the high road might be painful, but you’ll feel better about yourself down the road.

Without Notice. Another of the worst ways to quit your job is without notice. Failing to show up again after you’ve made the decision to quit is not only unprofessional, but it also gives your employer a reason to give you a bad reference. Not only that, but you’ll have to show back up to collect your paycheck, and what could be more humiliating?

After Vacation. Some employees think it’s clever to take their two weeks of paid vacation, then quit the day before they’re scheduled to return. This is extremely disrespectful and means your boss will have to scramble to fill your vacancy. This is one of the worst ways to quit your job because it shows you lack dedication.

Through E-Mail. It’s true that e-mail gives us an easy “out” because of its anonymity, but it’s also an unprofessional way to quit your job. If you can’t face your boss long enough to tell him you quit, you’re selling yourself short. Furthermore, you run the risk that your boss won’t receive it, then you’ve just quit without notice.

After Making a Mess. While you might enjoy trashing your office before you say your final farewell, you’ll probably be held responsible for the damage and it shows a unique level of immaturity. Clean out your desk when you quit your job and make sure everything is in order and that you haven’t taken anything that belongs to the company.

In Anger. We often make snap decisions in the heat of an angry tirade, then come to regret them at a later date – or perhaps only hours afterward. If you’re going to make the decision to quit your job, make sure you’ve thought it through. If you need to calm down, simply extract yourself from the volatile situation and come back when you’re more rational.